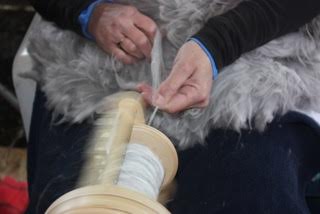 Listen to the full first episode!

In this episode, Ashley and I introduced ourselves and the podcast.  We discussed recent finished objects, imaginary knitting, and our experience at the Maryland Sheep and Wool Festival that took place May 6th and 7th at the Howard County Fairgrounds.

Oh, there were so many awesome (mis)adventures this past week because of the festival! 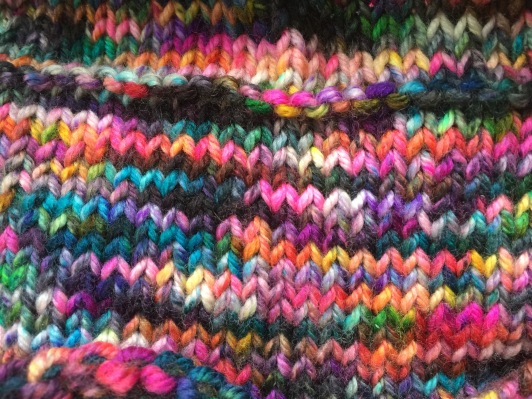 Ashley recently finished the Knitting Pure and Simple V-Neck Cardigan!  The buttons are from Woolworks and the backing ribbon is stash from Renaissance Ribbon- Kaffe Fassett series. (Possibly purchased from Patches in Chatsworth, CA.)

Tara recently finished the Vera Bear by Annita Wilschut and the matching sweater, An Outfit for Vera Bear.  Tara modified the pattern by omitting the hood and by using a 3 needle bind-off to connect the pocket lining to the outer part of the sweater.  Vera was knit in Cascade 220 and the sweater used stashed Cephalapod Yarns Traveller.

Old Bay on Everything:

In this section, we share our love of Baltimore and the greater Maryland area.  This week, we highlighted the Maryland Sheep and Wool Festival.  We both enjoyed the social aspects of the festival and connecting with fellow ravelers, podcasters, and vendors.  Ashely and her family enjoyed seeing the animals, including the sheep dog show on Sunday.

We met Aquilla of the Lefty Knitter video cast and Ashley chatted with Boston Jen of Down Cellar Studio.  Tara was able to catch up with a her friend, Lis Barsuglia-Madsen of Scandinavian Weave and Knit.

Tara and Ashley share a love of knitting, yarn and related misadventures. Between them both, they have enough stash to fill a yarn store, yet they don't have enough! They reside in Baltimore, MD. View all posts by misadventuresinknitting

Hello, We are Tara and Ashley, two friends from Baltimore, MD who are obsessed with knitting, yarn, and making things! We recently started a podcast under the same name, misadventuresinknitting. Thank you for visiting our blog.